“Mene, Mene, Tekel, Upharsin.” [“Number, Number, Weighed, Found Wanting.”] (God’s message to King Belshazzar before the destruction of Babylon, 12th October, 539BC)
“Veni, Vidi, Vici.” [“I came, I saw, I conquered.”] (Julius Caesar’s speech to the Roman Senate on defeating Pharnaces II of Pontus, 47BC)
“Don’t believe in yourself; don’t deceive with belief.” (David Bowie: Quicksand, 14th July 1971)
“Do you know who I am? And the position I haud?” (My father, Hugh Rankin, impersonating his boss at Lion Foundry, Kirkintilloch, 1979)

All of the above are probably a fair sum-up of my musical career. At times I’ve been complacent, boastful, doubtful and delusional, but who hasn’t? 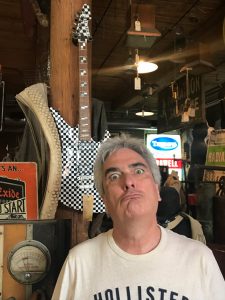 I have no enemies that I know of, I had them all killed during my Caesarean period, but I have many friends of many years. Some of them are Rock Stars; others are truck drivers, joiners, roofers, drummers and even one is in a wheelchair putting this whole Shitfest of a website together.
But it doesn’t end here.
Feel free to interact with us. Do you have any photos, videos, audio recordings or stories? We’d love to add ‘em to the site. Ask me questions in the Forum and I will do my utmost to answer, even if it’s “Why are you such a Dick?” or “Sound Elixir. What were you thinking, you Dick?”

Thanks for indulging my indulgence by checking this site out. It’s all about Me or to quote my own quote: “Here’s to fanning the flames of passion with the bellows of indifference.”